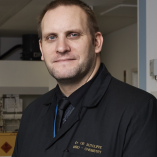 Oliver Sutcliffe graduated from the University of Liverpool with a BSc (Hons) in Chemical Sciences (1996) and subsequently obtained a PhD in Synthetic Organic Chemistry working on "New Extended Dipolar Systems" under Drs Richard Storr and Thomas Gilchrist from the same institution. In 1999, he joined Professor Martin Bryce's group at the University of Durham as a Postdoctoral Fellow investigating the application of enantiopure ferrocene ligands in asymmetric synthesis, before moving to industry and working as a Medicinal Chemist on the design, development and optimisation of drug molecules for a broad-range of biological targets, including cancer.

He moved to the University of Strathclyde in 2006, obtained an MSc in Pharmaceutical Analysis and after a period at the European Directorate for the Quality of Medicines and Healthcare (EDQM) in Strasbourg was appointed as a lecturer in the Strathclyde Institute of Pharmacy and Biomedical Sciences (SIPBS). In January 2012, Dr Sutcliffe joined the staff at Manchester Metropolitan University as a Senior Lecturer in Psychopharmaceutical Chemistry.

In recognition of his contribution to the field of New Psychoactive Substance (NPS) research, Dr Sutcliffe was appointed a Fellow of the Royal Society of Chemistry (FRSC) in August 2016. 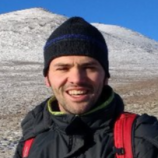 Ryan Mewis graduated from the University of Hull with a MChem (Hons) in 2005 and subsequently obtained a PhD in inorganic chemistry from the same institution by working on the “Synthesis of Tetraazamacrocycles: Biomedical Applications” under the supervision of Drs Archibald and Boyle.  In 2009 he joined the group of Professor Simon Duckett at the University of York as a Postdcotoral Fellow to work on a project related to the hyperpolarisation technique SABRE (Signal Amplification By Reversible Exchange) entitled the “Chemical Aspects of Hyperpolarisation”. This project, which was part of a joint collaboration with Professor Gary Green (University of York), was focused on developing what is primarily a spectroscopic technique, to one that can be used in clinical diagnosis.

In February 2015, Dr Mewis joined the staff at Manchester Metropolitan University as a Lecturer in Inorganic Chemistry. He was promoted to Senior Lecturer in 2016. Dr Mewis is a member of the Royal Society of Chemistry (RSC) and the European Society for Molecular Imaging (ESMI). 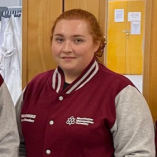 Molly Millea graduated from Manchester Metropolitan University with a first class, MChem (Hons) degree in 2021.  Her research primarily focused on the chemical synthesis, analytical characterisation and development of quantitative NMR (qNMR) methods for the detection of psychoactive stimulants within seized forensic samples.

For the last four years, Molly has supported a number of back-of-house drug monitoring (also known as back-of-house drug testing or drug checking) projects through the MANchester DRug Analysis & Knowledge Exchange (MANDRAKE) partnership with Greater Manchester Police and other stakeholders.  Molly is currently responsible for coordinating our harm reduction activities across Greater Manchester.